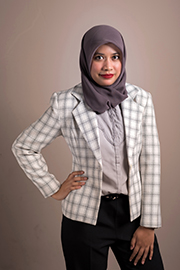 Dhania graduated from Universitas Gadjah Mada in 2016 with a bachelor’s degree in English. In 2014, she also spent a semester as an exchange student at The University of Adelaide, studying literature, film, and creative writing.

Dhania translates and edits SMERU’s publications in Indonesian and English.

Prior to joining SMERU, she was a culture journalist for The Jakarta Globe, an English-language online news portal. Her experience includes covering prestigious international events, such as Singapore Media Festival 2017 and International Transport Forum (ITF) 2018 in Leipzig, Germany. Her writings have also appeared in business magazine Globe Asia and the print edition of Manual Jakarta. Since 2015, she has also been working as a freelance translator, primarily for Fourcolours Films, whose productions have participated and won awards at various world’s film festivals.

Dhania was chosen as the best graduate in Universitas Gadjah Mada’s Faculty of Cultural Sciences (FIB UGM), thus representing her faculty in the August 2016 graduation ceremony.