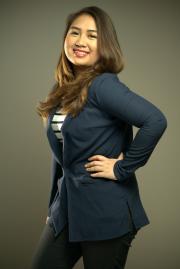 Rezanti is a qualitative junior researcher specializing in the issue of children and youth. She is responsible for data collection as well as analyzing and supporting the dissemination of research findings.

Rezanti started her career in SMERU as an intern. She was involved in a study on Urban Child Poverty and Disparity in Indonesia: The Unheard Voices of Children Living in Poverty, a research collaboration between SMERU and Unicef. She was in charge of making a research video which was played at SMERU's Research Sharing Event and was viewed by national and local government officials, including Mr. Ganjar Pranowo (the Governor of Central Java) and F.X. Hadi Rudyatmo (The Mayor of Kota Surakarta).

Rezanti was awarded honours for her thesis titled “The Association between Adolescents’ Romantic Involvement and Risk-Taking Tendency Moderated by Cognitive Thought Process”.