What next after Jakarta ends water privatisation? 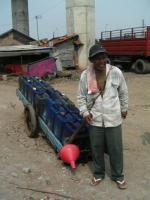 After having been run by private corporations for almost two decades, water services in Jakarta are starting a new era.

Not long after, the Central Jakarta District Court ordered the Jakarta government to revert its control over water resources. This abolished 25 years of water contracts between the administration and two private water companies.

The rulings meant that control for water management returned to the public sector. This follows a global trend – around 180 cities in 35 countries have returned control to municipalities in the past 15 years.

The de-privatisation of water services in Jakarta creates new challenges for the government to ensure universal access to water.

The Indonesian government, with the support of international financial agencies, privatised water in the 1990s with the expectation of improving services for the public.

In the 1990s and early 2000s, international financial institutions promoted water privatisations globally through various measures. In Indonesia, the International Monetary Fund (IMF) required the government to implement “water reforms” to receive a loan package after the Asian Financial Crisis.

The World Bank’s Water Resources Sector Adjustment Loan was also influential in getting the 2004 water law passed. This law became the basis for the government to offer water concession contracts to the private sector and for privatising financially “unhealthy” public water providers.

Impact of privatisation to water services

But private water companies did not manage to solve the complex problems that the public sector faced. In addition, Jakarta water privatisation brought unintended consequences.

The main problem was the continuously increasing tariff since privatisation, from Rp 1,700 (around A$0.16) to Rp 7,020 (A$0.68) per cubic metre in 2014, which did not lead to improved services. The Jakarta water tariff is higher than other major cities in Southeast Asia. A water vendor in Jakarta. Cak-cak/Flickr, CC BY

The high tariff and limited piped water connection constrain access to water for the poor. They had to rely on other water sources, including contaminated wells or buying water from vendors. This increased health risks as well as the economic burden for the poor.

Meanwhile, some rich residents and businesses chose to extract ground water to avoid paying high tariffs. This exacerbated the environmental risks for Jakarta.

The companies also failed to achieve technical targets set in the contracts. Water losses were high; service coverage expanded slowly. The companies did not manage to provide potable water.

But contracts between the government, represented by PAM Jaya as Jakarta’s public water entity, and the water companies did not contain penalties on low performance. The contracts also lacked clear investment targets.

Despite the poor performance, private water companies still reap profits through a complex mechanism that distinguishes “water charge” – what the private companies charge for water to PAM Jaya – from “water tariff”, which is what consumers pay.

In 2011, PAM Jaya proposed a contract negotiation. It claimed huge financial losses, which would increase if privatisation continued, up to Rp. 18.2 trillion (AUS$1.82 billion) by the end of the 25-year contracts. The Jakarta government eventually has to assume these losses.

The current court rulings give the government a starting point to re-design water management institutions to ensure universal water access. Many see the return of public control as momentum to develop a new water management framework.

The Jakarta government needs a holistic approach – one involving a change of paradigm and institutional transformation as a basis for management and technical changes – to deal with the complexities of providing water for a city of 10 million people.

Ensuring water for all: community-based institutions for the poor?

First, the government should include water as a human right as a guiding principle. This means water must be affordable for all residents. This principle provides a clear obligation for water providers to serve all residents, including poor residential areas.

Without this obligation, water providers can avoid servicing the poor. They are perceived as less able to pay the water tariff.

But many poor households spend more to source water elsewhere. They also pay additional expenses, such as for electricity to pump ground water and gas to boil water. This adds to their total spending for water.

The current water tariff arrangement is incompatible with the socioeconomic characteristics of the urban poor. They face difficulties with paying regular monthly water bills because their livelihoods are based on the cash economy. Irregular jobs in the informal sector mean that their immediate incomes are also immediately spent.

These characteristics need to be taken into account in developing new water institutions in Jakarta. The government should look beyond conventional economic approaches, which have failed to increase water access for the poor.

Finding innovative solutions requires thinking outside the box. The government may consider community-based mechanisms for organising collective water distributions and payments in poor neighbourhoods. Urban communities may adapt and modify some traditional collective irrigation water institutions such as Subak in Bali or Bau in Java.

Further investigation in this area can be useful to find practical solutions for affordable water for the poor while reducing the financial burdens for water providers. This mechanism may increase water revenue.

A post-privatisation institutional arrangement should also address the financial challenges of improving ageing water infrastructure. As control over water management returns to the Jakarta administration, the government is inevitably responsible to expand and maintain the operation of water services.

We should not underestimate the financial challenges that public water providers face in building water infrastructure. The budget for waterworks in Jakarta would have to compete with other city programs such as education and health services.

Meanwhile, the Jakarta government’s options to raise funds are limited to local tax revenues, local government bonds or borrowing from the national government. Investigating other alternative sources of financing is a critical step.

Regardless of the financing model, efficiency in water services needs to be improved. If the government chooses to involve the private sector (which is not fully shut out under the current regulation) to some extent, the strict measurement of service performance should be included in the institutional arrangements.

Water activists have recommended co-operating with other public water entities that have been successful in providing water for its residents. Jakarta may partner with cities like Surabaya to enable transfers of knowledge from the city’s water agency. How co-operation among public entities can improve water services needs to be further studied.

De-privatisation is not a panacea to end the water crisis in Jakarta. It is a first step that allows the public to hold public operators accountable in managing water services. Civil society should continuously monitor for transparency and accountability in the process to transform Jakarta’s water service.