The passing of a dear friend is often too soon, sudden. That is exactly what I felt when I heard the news early on Saturday, 19 February, that Gregory Churchill had passed away.

Pak Greg, as he used to be called, had been one of SMERU’s trustees since the establishment of this research institution in 2001. You can imagine how many ups and downs we had shared for over two decades.

In 2000 I was introduced to Pak Greg by Ibu Suzanne Siskel, the Ford Foundation Country Representative in Indonesia. At that time, we were looking for a member of the board of trustees to establish SMERU. Since then, I had always been impressed by his knowledge and expertise, his love for Indonesia, and his efforts to contribute to the progress of Indonesian society.

With Pak Greg’s background as an advocate, he played a pivotal role in helping us prepare the various legal requirements to establish a research institution. Since SMERU’s establishment, every time he attended meetings of The SMERU Foundation’s trustees, supervisors, and managers, he would always give clear, objective, and constructive input particularly so that SMERU always focuses on maintaining its research quality and independence.

We, as researchers, had always been reminded to think critically and analytically. In addition, he always encouraged us to conduct research that has an impact on the improvement in the lives of Indonesian society. He was a dedicated supporter of SMERU in a simple, yet colorful and joyful way.

At the last meeting of The SMERU Foundation’s trustees, supervisors, and managers, he asked for the permission to resign. However, at the time, we politely refused his request. It seemed that he already had a hunch. Unfortunately, that meeting was really his last meeting with SMERU. We greatly miss him.

In a wider context, an Indonesianist is generally defined as an expert or researcher on Indonesia (usually foreign nationals). Pak Greg transcended such a definition. His work in establishing the Legal Documentation Center of the Faculty of Law, Universitas Indonesia, and his involvement in a number of legal reform projects in Indonesia, such as the Netherlands-Indonesia Legal and Judicial Reform Program, including the bankruptcy law reform, judicial system reform, as well as the establishment of Commercial Court and Anti-Corruption Court, show how major and significant his contribution was to this country.

Moreover, Pak Greg was also a connoisseur of Indonesian arts and culture. His rich collection of Indonesian puppets (wayang) suggests that, compared with most Indonesians, Pak Greg, who was from the USA, knew more about Indonesian traditional puppetry. It is not surprising that, until his death, he lived, and even requested to be buried, in Indonesia.

Now is the time for us to let go of a dear friend. With all of our respect and gratitude, good bye, Pak Greg. Rest in peace. You must be smiling now for the virtues you cultivated, the meaningfulness you sought from the things you enjoyed the most, and the acts of kindness you brought to humanity. 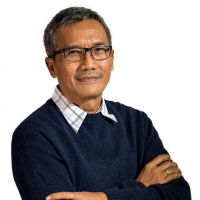