The COVID-19 Pandemic Is Not Over Yet

Indonesia has so far been unable to control the COVID-19 pandemic. Since the announcement of its first COVID-19 case in March 2020, reported daily cases have continued to increase during 2020 and through into 2021. From the current situation, it is clear that Indonesians cannot yet enjoy a full return to the living conditions experienced before the pandemic struck.

Indonesia's Economy Has Not Totally Recovered Yet

Indonesia’s economy has entered crisis state since the 2nd quarter of 2020. Two reasons are behind this crisis. First, increasingly more of the population (including those who are productive) are becoming infected with COVID-19. This lowers households’ ability to fulfill their daily needs, particularly for those directly affected by the COVID-19 pandemic. Second, the social restrictions imposed by the government have prevented the economy from operating at 100% of its full capacity with a number of businsses having to close down and workers be temporarily laid-off.

One indicator of the economic crisis is the economic growth rate. On 5 May 2021, Statistics Indonesia released a report that Indonesia’s economic growth rate in the 1st quarter of 2021 was -0.74%. The economic conditions during this period were much worse than before the pandemic, even though it showed improvement when compared to the economic situation in 2020. This indicates that Indonesia’s economy is still well below the normal rates of the period before the pandemic began. At the same time, the rate of growth of the per-capita national income (the measurement of national average welfare) also decreased by 3.15% in 2020. This indicated that there has been a decline in the level of household welfare in Indonesia in 2020 in comparison with 2019.

On 15 July 2021, Statistics Indonesia released a report that in March 2021, 10.14% or 27.54 million of the Indonesian population were categorized as poor. The poverty rate in March 2021 is slightly lower than that in September 2020 but still higher than the level of poverty before the pandemic in September 2019 (Figure 1). 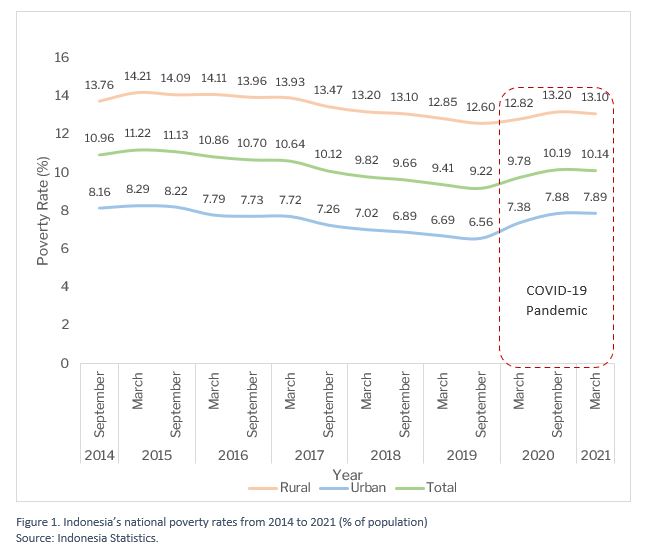 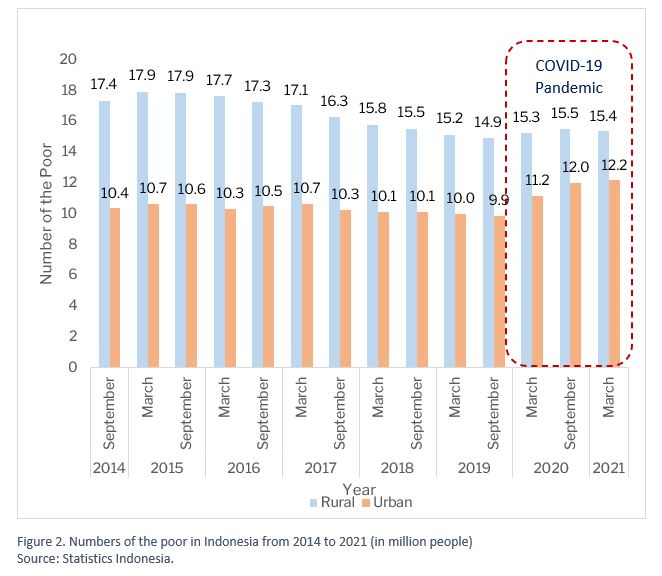 The decline in the level of household welfare (based on the per-capita expenditure) is due to, among other things, a decrease in household income. SMERU’s study[1] shows that the income of 75% of households decreased during the pandemic. As many as 66% of households owning small enterprises have also experienced a decrease in the number of buyers and rate of business turnover. Also, in August 2020, the unemployment rate increased by 2.7 million people. At the same time, the average wage for workers or laborers decreased by -5.2% from the average wage before the pandemic.

Welfare Rate Drops during the Pandemic

A household’s welfare can be measured, among other things, by its per-capita expenditure. This expenditure provides a clue on the household’s actual purchasing power or its ability to meet the cost of daily needs. Figure 3 shows the changes in household expenditure level (in %) for a period before the pandemic (September 2019) through to during the pandemic (September 2020). In Figure 3, households are ordered using 100 percentiles, where percentile 1 means the poorest and percentile 100 means the richest. 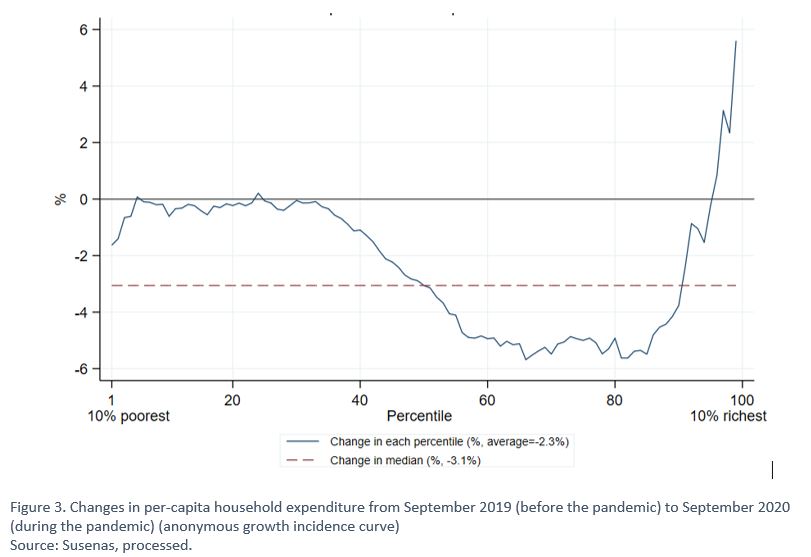 Who Falls into Poverty, Who Rises to Higher Class?

To see which households fall below the poverty line, a set of data with two points of time for each household is needed. The households and individuals participating in the September 2020 Susenas and March 2020 Susenas are the same. Therefore, this data is representative of the changes in rank of an individual or household based on their welfare class. Welfare classes are divided into five groups, namely the poor, vulnerable, aspiring middle, middle, and upper classes (World Bank, 2019). Figure 4 shows the dynamic nature of changes in the welfare classes from March to September 2020 based on the number of individuals. 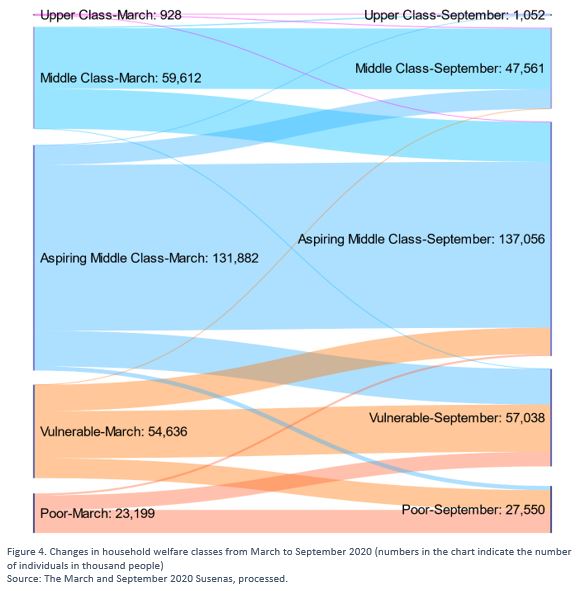 Coping Mechanisms Applied by Households during the Crisis

As indicated earlier, it is evident that the welfare level of most households in Indonesia declined during the crisis resulting from the COVID-19 pandemic. To make ends meet during the pandemic, households employ a number of strategies. Figure 5 specifies some of the coping mechanisms generally applied to deal with the decline in household welfare. Methods most commonly used by households to make ends meet include selling or pawning assets, reducing nonfood expenditure, borrowing money from relatives, and spending less  on food items. Only 15% of households report that their daily needs are met. 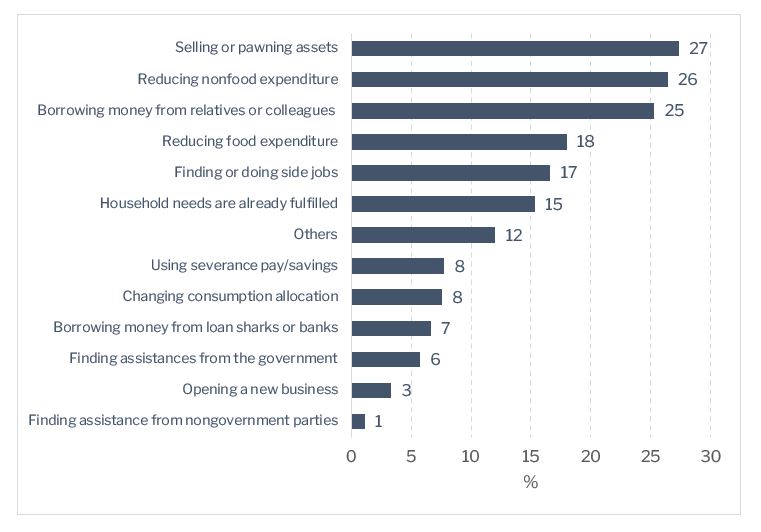 Many factors influence a household’s ability to deal with the crisis. One of these factors are whether or not they have savings (money that can be easily disbursed) or assets (goods that are easy to sell or pawn). Figure 6 shows the proportion of savings and asset ownership nationally. Up to 51% of households in Indonesia have neither savings nor assets. Meanwhile, 14% of households have savings to fulfill their needs for more than 6 months, 10% have savings for less than 1 month, and the rest have savings for 1–6 months. 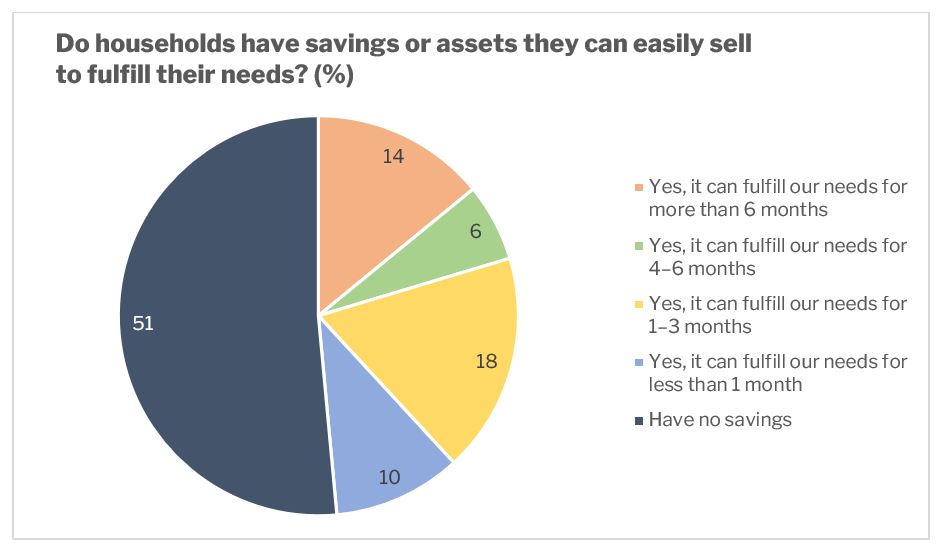 Four major programs in the form of cash assistance, namely PKH, BPNT, BLT DD, and BST, are used in calculations when measuring the value of the assistance programs in terms of adequacy. These four programs cover at least 35 million or 50% of households. 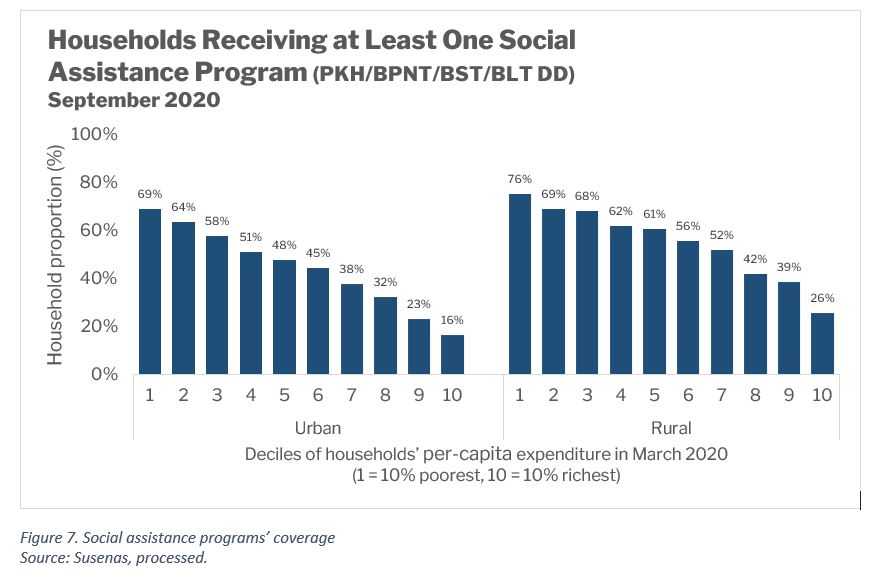 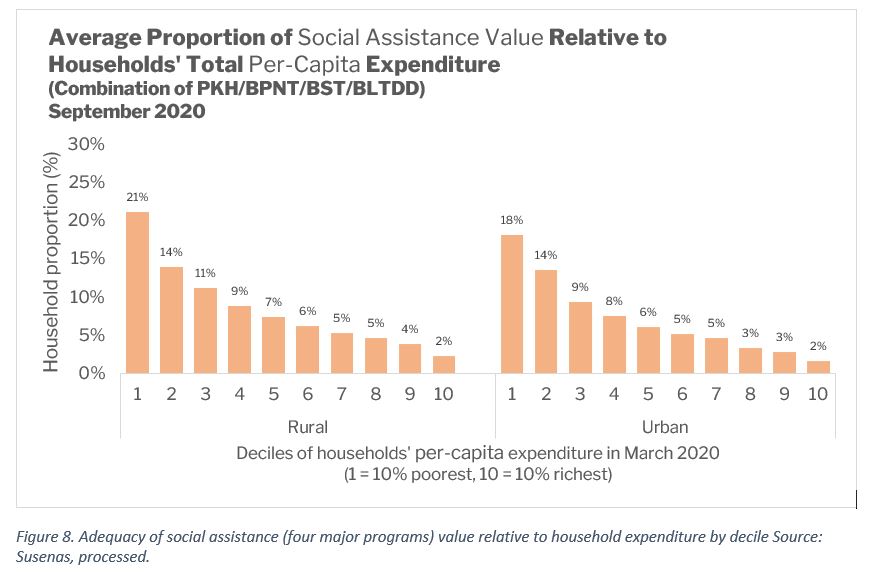 From the latest (status) reports (per 15 July 2021), conditions related to the COVID-19 pandemic in Indonesia show no evident signs of improvement. In response to the worsening situation, the Bank of Indonesia has even gone as far as to adjust its 2021 economic growth projection for the country from 4%–5% to 3.8%. One of the main steps the government has to take to control the pandemic is to accelerate the vaccination program at the national level. Also, social assistance is still desperately needed by the people to reduce household burden, particularly for poor households, in the midst of the current crisis.

Simply put, three steps can be taken by the government to improve the effectiveness of social assistance.

Secondly, the government can expand the coverage of existing social protection programs, particularly to include current poor and vulnerable households not yet covered by any program. Figure 7 shows that around 25%–30% of the 10% poorest households did not receive any social assistance program. The number of households currently not included in any program is also relatively large for the 40% poorest households. For this purpose, it is crucial to improve the database on poor and vulnerable households as well as those affected by the pandemic since a good database determines whether a program correctly targets its beneficiaries and is successful or not.

Finally, the government should ensure that social assistance benefits are distributed in a timely manner, particularly before the impact of the crisis is too great on households. Accurate targeting and timeliness are key to ensuring that these social assistance programs are effective in helping households deal with the decline in their welfare.

[1]UNICEF, UNDP, Prospera, and SMERU (2021) ‘Analysis of the Social and Economic Impacts of COVID-19 on Households and Strategic Policy Recommendations for Indonesia.’ Research Report. Jakarta: The SMERU Research Institute. 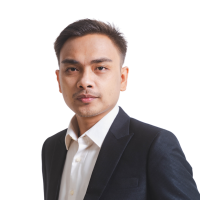 Weighing the Risks, Building a Sense of Security amid the Pandemic

Surviving the COVID-19 Pandemic as Viewed from the Economic Perspective

A Quick Look at Public Adaptation during the Pandemic

Twists and Turns in COVID-19 Testing Capacity with PCR Method